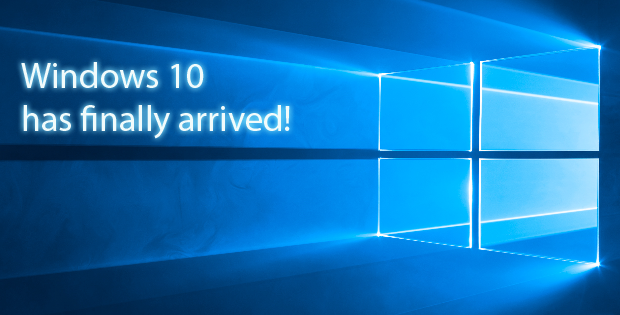 Microsoft’s latest iteration of its 30-year-old Windows operating system has finally arrived. And with it, a flood of positive reviews. I’ve spent the last week upgrading 4 computers from Windows 7 to Windows 10 and here’s my two-minute take on Windows 10 that touches on the most important changes and saves you from wading through hundreds of reviews.

Upgrade with Ease: I’ve done many Windows upgrades over the years and this was by far the easiest upgrade I have ever seen. I say seen because basically I just sat back and watched as Windows 10 installed and upgraded my PC from Windows 7 to Windows 10 with very little action on my part. I basically downloaded the Windows 10 USB/DVD MediaCreationTool from Microsofts website and ran it directly on the Windows 7 machine I wanted to upgrade. There were a few prompts along the way that I had to hit next or okay to but that was about it.

GoldMine Works: My first task was making sure all the applications that I used on Windows 7 worked on Windows 10, and to my surprise yes everything has worked without any issues. We are currently (at the time of this posting) running the latest build of GoldMine (2015.1 Hotfix 2). The manufacture of GoldMine (HEAT Software) has not yet officially released a statement or confirmed that GoldMine is compatible with Windows 10, but I would expect that sometime soon with their next release. As for all my other applications (MS Office,  QuoteWerks, Photoshop, etc. etc.) the same can be said.

Speed indeed: It’s fast. I noticed the speed within minutes of using Windows 10 for the first time. Everything is snappier. That includes opening and closing applications or using Microsoft’s new Edge browser. At the moment, I’m using a Dell OptiPlex 380 with 2 Gigs of RAM and a 32 Bit OS. It’s not the fastest machine by any means, but performance has improved noticeably on Windows 10. It not only runs faster but cooler.  Note — I don’t know if everyone will see a noticeable performance improvement with Windows 10. My guess is that everyone’s mileage may vary depending on how optimized the hardware is for Windows 10.

Windows win-win: The return of a monolithic, traditional windowed, mouse-and-keyboard interface is probably the single biggest change — and it’s a very striking difference the first hour or so you use Windows 10 (if you’re coming from 8.1). Subconsciously, I kept waiting for the old 8.1 touch interface to make an unwelcome appearance. But that will never happen unless you want it to.

And apps that you download from the Microsoft Store – which used to automatically launch the touch interface – now run as traditional windowed applications. I can’t overstate how welcome this is. For example, a couple of dictionary apps, which previously stymied my workflow because they ran in touch mode, now behave themselves very nicely as regular Windows applications.

Virtual desktops: For me, this also ranks as one of the top new features. Click on the “Task View” button on the task bar (which runs along the bottom of the Windows 10 screen) and it shows all of the currently running apps. But the killer is that you can drag apps into “desktops” that run as virtual stand-alone environments. For example, you can create “Desktop 1” as your normal work environment, running all of your productivity applications, then create “Desktop 2” as your fun space with games, videos etc. Or maybe parcel up different Desktops (1,2,3,4,5) based on different projects you’re working on. Virtual desktops is a great asset that unclutters and clarifies.

Notifications and controls: Action Center is another great addition. Click on “Notifications” on the right-hand side of the Task Bar and up pops up a bunch of useful stuff. For example, you can see all of your most recent messaging and email, switch to tablet mode, get quick access to settings, and toggle items like Wi-Fi, Bluetooth, and airplane mode.

A Mac can’t touch that: Microsoft of course isn’t abandoning touch just making it less intrusive. Despite all of the criticism heaped on Microsoft (include me in that heap) about Windows 8.1’s dual personality, touch itself (free of the unwelcome Window 8.1 touch mode) is nice to have as an option. If you have a touch screen (which many new Windows laptops do these days), you can always use your fingers to, for example, navigate Web pages (which I prefer sometimes). And the new Microsoft Edge browser takes touch and stylus input a step further. Edge allows you to use a stylus to write directly on the browser/screen or even scrawl notes with your finger – which can all be shared. I didn’t have time to try this extensively but it seemed to work pretty much as advertised.

And let me add that touch is a too-often under-emphasized advantage over the Mac. It has always struck me as odd that the Mac lacks touch. Especially when Apple is now selling a very-tablet-like laptop, the new 12-inch MacBook Retina. On the other hand, both the HP Elitebook 1020 and the 2015 version of the Dell XPS 13 have touch. It’s great to have when you need it.

In summary, I’ll repeat what I’ve said before (and echo other Windows 10 reviews), think of Windows 10 as just a much better version of Windows 8.1. That makes the upgrade from Windows 7 or 8.1 to Windows 10 a no-brainer.