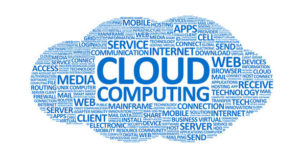 Cloud computing is all the rage. It’s become the catch phrase for many people, looking to take advantage of what it has to offer. The problem is that (as with Web 2.0) everyone seems to have a different definition/idea of what cloud computing is.

As a metaphor for the Internet, “the cloud” is a familiar cliché, but when combined with “computing,” the meaning gets bigger and fuzzier. Some analysts and vendors define cloud computing narrowly as an updated version of utility computing: basically virtual servers available over the Internet. Others go very broad, arguing anything you consume outside the firewall is “in the cloud,” including conventional outsourcing.

Cloud computing comes into focus only when you think about what IT always needs: a way to increase capacity or add capabilities on the fly without investing in new infrastructure, training new personnel, or licensing new software. Cloud computing encompasses any subscription-based or pay-per-use service that, in real time over the Internet, extends IT’s existing capabilities.

Cloud computing is at an early stage, with a disparate list of providers large and small delivering a slew of cloud-based services, from full-blown applications to storage services to spam filtering. Yes, utility-style infrastructure providers are part of the mix, but so are SaaS (software as a service) providers such as Salesforce.com, Zoho.com, even Google Apps. Today, for the most part, IT must plug into cloud-based services individually, but cloud computing aggregators and integrators are already emerging.

Here’s a rough breakdown of what cloud computing is all about:

1. SaaS (Software as a Service)

This type of cloud computing delivers a single application through the browser to thousands of customers using a multitenant architecture. On the customer side, it means no upfront investment in servers or software licensing; on the provider side, with just one app to maintain, costs are low compared to conventional hosting. Salesforce.com is by far the best-known example among enterprise applications, but SaaS is also common for HR apps and has even worked its way up the food chain to ERP, with players such as Workday. And who could have predicted the sudden rise of SaaS “desktop” applications, such as Google Apps and Zoho Office?

The idea is not new, but this form of cloud computing is getting new life from Amazon.com, Sun, IBM, and others who now offer storage and virtual servers that IT can access on demand. Early enterprise adopters mainly use utility computing for supplemental, non-mission-critical needs, but one day, they may replace parts of the datacenter. Other providers offer solutions that help IT create virtual datacenters from commodity servers, such as 3Tera’s AppLogic and Cohesive Flexible Technologies’ Elastic Server on Demand. Liquid Computing’s LiquidQ offers similar capabilities, enabling IT to stitch together memory, I/O, storage, and computational capacity as a virtualized resource pool available over the network.

3. Web services in the cloud

Closely related to SaaS, Web service providers offer APIs that enable developers to exploit functionality over the Internet, rather than delivering full-blown applications. They range from providers offering discrete business services — such as Strike Iron and Xignite — to the full range of APIs offered by Google Maps, ADP payroll processing, the U.S. Postal Service, Bloomberg, and even conventional credit card processing services.

4. Platform as a service

Another SaaS variation, this form of cloud computing delivers development environments as a service. You build your own applications that run on the provider’s infrastructure and are delivered to your users via the Internet from the provider’s servers. Like Legos, these services are constrained by the vendor’s design and capabilities, so you don’t get complete freedom, but you do get predictability and pre-integration. Prime examples include Salesforce.com’s Force.com, Coghead and the new Google App Engine. For extremely lightweight development, cloud-based mashup platforms abound, such as Yahoo Pipes or Dapper.net.

One of the oldest forms of cloud computing, a managed service is basically an application exposed to IT rather than to end-users, such as a virus scanning service for e-mail or an application monitoring service (which Mercury, among others, provides). Managed security services delivered by SecureWorks, IBM, and Verizon fall into this category, as do such cloud-based anti-spam services as Postini, recently acquired by Google. Other offerings include desktop management services, such as those offered by CenterBeam or Everdream.

A hybrid of SaaS and MSP, this cloud computing service offers a service hub that users interact with. They’re most common in trading environments, such as expense management systems that allow users to order travel or secretarial services from a common platform that then coordinates the service delivery and pricing within the specifications set by the user. Think of it as an automated service bureau. Well-known examples include Rearden Commerce and Ariba.

The integration of cloud-based services is in its early days. OpSource, which mainly concerns itself with serving SaaS providers, recently introduced the OpSource Services Bus, which employs in-the-cloud integration technology from a little startup called Boomi. SaaS provider Workday recently acquired another player in this space, CapeClear, an ESB (enterprise service bus) provider that was edging toward b-to-b integration. Way ahead of its time, Grand Central — which wanted to be a universal “bus in the cloud” to connect SaaS providers and provide integrated solutions to customers — flamed out in 2005.

Today, with cloud-based interconnection seldom in evidence, cloud computing might be more accurately described as “sky computing,” with many isolated clouds of services which IT customers must plug into individually. On the other hand, as virtualization and SOA permeate the enterprise, the idea of loosely coupled services running on an agile, scalable infrastructure should eventually make every enterprise a node in the cloud. It’s a long-running trend with a far-out horizon. But among big metatrends, cloud computing is the hardest one to argue with in the long term.

If your organization is looking to take advantage of cloud computing and are not sure what options are available to you, please contact First Direct Corp, so that we can discuss your needs and advise you on what might work best for you.